You Hire can also offer Reach Stackers as an alternative Container Handling solution.

Below is a general overview of the operational characteristics –

Reach Stackers can access a second row with a full container and handle light weight containers in the third row. Laden Container Handlers can only handle containers in the first row. Reach stackers when equipped with stabilisers (that cannot be fitted on laden container handler) can be used for extended reach applications such as second rail line loading/unloading.

2) ABILITY TO SELECT CONTAINERS IN A BLOCK STACK

Reach stackers are able to much more efficiently use stacking space in the terminal as it is possible to block stack containers up to 4 rows with a minimal impact on the number of shifts required to select any container in the stack. 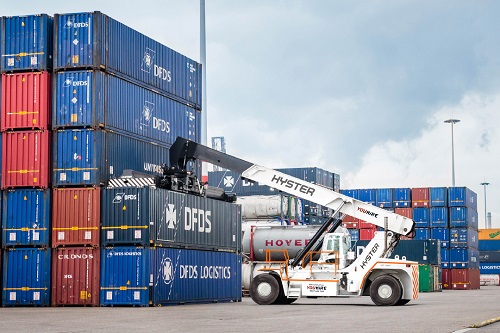 This determines a completely different weight distribution between the two machine types.

This difference in weight distribution alters the ground pressures as well as the overall stability and speed of operation.

As a result of the above weight distribution, a Reach Stacker has a longitudinal stability that is far superior to the one of a Laden Container Handler.

When driving, which is the phase of the operation where the stability is most important and where typically the truck is at a higher risk of overturning  the Reach Stacker, which has the ability to “reach-in” and carry its load over its front axle enables a much higher stability factor than the equivalent Laden Container Handler.

Many engineering calculations have this stability variance as much as double.

The much higher stability in driving configuration enables a Reach Stacker to be a lot faster than a Laden Container Handler when performing load transfers. In short, the longer the distance covered in a working cycle the higher the productivity of a Reach Stacker.

Reach Stackers are equipped with a container spreader that is connected to the boom via a high articulation system:

Reach Stackers can handle containers even with the chassis positioned at 45 degrees against the stack substantially reducing the stacking aisle and therefore making it possible to stack in areas that would normally be too narrow.

The longer side-shift range of a Reach Stacker enables the unit to balance containers that are out of balance and still retain much of its side-shift ability to perform a safe and fast positioning of the out of balanced container on the stack.

Reach Stackers do not have the mast to obstruct the vision of the operator. This is a substantial safety advantage when moving containers around the terminal.

The reach stacker can lower the boom so that its overall height in this position is just approximately 5 metres enabling the unit to negotiate low doorways, power cables and passing roadways. It also enables the machine to be parked indoors for maintenance.

A Reach Stacker can withdraw its spreader (even with load) over the front tyres. This makes the machine extremely compact when driving in yards. This is not possible with a Laden Container Handler as it is not capable of rotating its spreader or load at angles which would allow it to fit into narrow spaces.

While the advantages of a Reach Stacker may be of benefit to large container handling operators, there are other elements that should be considered. Firstly, in basic terms a Reach Stacker is going have a heavier overall operational weight than a standard Laden Container Handler.

The expert team at You Hire would be pleased to provide a no obligation assessment of your operation and offer our advice on the most suitable Container Handling equipment for your business based on the operational environment, productivity and commercial considerations.